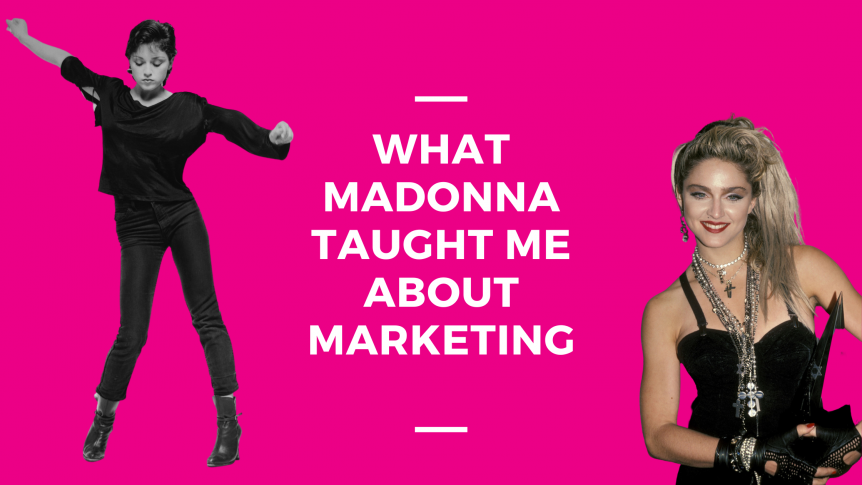 Love her or hate her, you can’t argue with the Guinness World Records who have listed her as the most successful female artist.  In fact she is recorded as the 5th highest selling artist of all time, beating artists such as the Rolling Stones, U2 and Elton John.

As a child growing up in the 80’s my mother hated Madonna, I was allowed to own her cassette tapes, but my mother drew the line at her video tapes. Madonna was a part of my childhood, and was a constant reminder of controversy and challenge. On reflection several decades later here are some lessons I think we can all take from Madonna’s marketing.

Ask for what you want

So often in life and business we don’t ask for what we want. We have lower expectations of ourselves and others. In business we need to be clear on what we want and then tell people so that they can help us achieve it. We won’t get what we don’t ask for. So be clear on what you want and make sure the people who can help you get there know what it is and how they can help you. When Madonna appeared on American Bandstand in 1984, Dick Clark asked her ‘what are your dreams, what’s left?’. Her answer, ‘To rule the world’.

2. It’s ok to be polarising

We are often really frightened in business of being polarising. We don’t want to rock the boat or put anyone off. We think that the best way is for everyone to love us. The reality is that not everyone is going to love you and it is far better to be yourself, so that you develop a few raving fans. If you don’t do this you risk being vanilla, and blend into the background.

No one can accuse Madonna of being in the background. There is a freedom in being yourself and doing what you believe in. Give yourself permission to be bold and be who you are and take some risks.

“I’ve been popular and unpopular, successful and unsuccessful, loved and loathed and I know how meaningless it all is. Therefore I feel free to take whatever risks I want.”

Madonna broke every rule. She set herself apart by doing this differently. She was fearless and made brave decisions. She was a trend setter and often did things first. Which of course didn’t always win her positive attention. Look at your firm and find ways that you can do things differently or first. There are lots of areas of law and legal practices that are ready for a shake up, be the change that is needed in your area.

“Better to live one year as a tiger, than a hundred as sheep.”

Madonna is the queen of reinventing herself. She has changed her look, her style, her music countless times. She has come back from controversy and she has leaned into it. She wants to lead the way. The New York Ties has credited her with changing our culture 60 times. In business we need to do the same, change our logo, change our target market, change our point of view. Challenge the status quo.

Madonna has never been known as a songwriter, however, she has writing credits on every album since her third LP. Either her need for creative control of her work. She controls how she is represented. It is also a savvy business move as it guaranteed her royalties.

Madonna was the ultimate influencer. She is credited with bringing yoga to the masses, popularising Kabbalah as the ‘IT’ religion, changed our views on sexuality and women, challenged the Catholic Church and made wearing crucifixes popular. She challenged race and homosexuality like no one else had. She had loyal fans that took on board what she was promoting. She changed the world. How can you be an influencer? How can you tap into influencers to help your marketing?

So love her or hate her I don’t think you can argue her incredible business prowess.

“I stand for freedom of expression, doing what you believe in, and going after your dreams.”

If you want help with being a bit more outrageous with your marketing. You can contact me and we can arrange a free chat.